In this blog, we'll go over common cold weather related issues related to the Ford Powerstroke 6.0L and the HEUI fuel system.

There's quite a few issues that could cause a 6.0L not to cold start.

Diagnosing with and without tools are both challenging.  For an end user without electronic tools, like the Ford IDS, you will have to diagnose by physical conditions.  Even with a good tool, a no start condition may require some physical checks before you can read any data.

If during a long cranking, with no start,  you get a lot of white smoke out of the exhaust, the problem could be the glow plug system, the FICM,  or possibly the fuel injectors. White smoke is normally unburnt fuel in a diesel.

If you do not get any smoke at all, the problem is most likely the FICM, high pressure oil system, or the low pressure fuel system (fuel pump, air in line, filters, etc.).

The 6.0 injector has two solenoids. one energizes the injector open and the other closes it.  When it's open, it's fueling, while closed there's no fuel to the cylinder.  How long it opens or closes is considered the pulsewidth of the injector.


How does the FICM work and how do I test it?

Back in late 2005, Ford came out with a new program referred to as inductive heating for the FICM, intended to comba tissues with missing and rough-running during cold startup due to sticking spool valves in the injectors. This program works by running “extra” current through the close coil to generate heat and warm up the spool. On paper itwas an excellent idea, and we advised a lot of potential injector customers tohave their FICM’s reflashed rather than buy a new set of injectors.

Based on our testing, it appears that the early models of FICM’s only used the inductive heating when the EOT was less than 48*F or so (if not reflashed at a dealer).

The “first” updated heating strategy turned it on any time the EOT was less than 184*F, meaning every time you started the truck if it was shut off for more than 10 minutes! Ford’s newest update to the heating strategy has it coming on below 148*F; better, but that’s still a lot of current draw.

Although the FICM on the 6.0 is much more “intelligent” than the IDM on a 7.3, the FICM’s basic job is to convert 12VDC to 48VDC and deliver this to the injectors at the proper time. Under normal operating conditions, the FICM typically draws 6-7 amps at 12V into the FICM power supply, which is well within its design limits. However, with the inductive heating active this current draw increases to 24-32 amps—it pegs the 30 amp meter on our test bench!

Although the FICM power supply is capable of sustaining this load for short periods of time (1-2 minutes) it eventually gets very hot.

If this was all that happened, things wouldn’t be too bad, but there are several components on the printed circuit board that were not properly soldered during the manufacturing process, and as the PCB heats up and expands, the solder under these components cracks and they lose their electrical connection. Also, many of the circuit board components are underrated for (near) continuous high current loads. The FICM’s 48 volt power supply is actually four separate or independent units; if one of the four goes down, the other three can supply enough current to run the truck, even with the inductive heating active. If two of the four go out, the truck will start and run normally as long as it is warm out, i.e. as long as the inductive heating does not turn on. If three of the four go out, the truck will probably not start or run unless it is at full operating temperature, and even then it may not start. If the injector voltage is over 35 volts, they run OK, although not as well as when it is 48 volts. If the voltage drops below around 24 volts, the injectors cannot fire. While most scan tools will display the FICM voltage, they do not always show the correct value. For instance, AutoEngenuity can only display voltages between 40 to 56 volts, so if the voltage is 35, it will display 40.


How to check your FICM for proper voltage output.

(Perform this check when the engine is completely cold.)

1. Remove the two bolts that hold the coolant reservoir to the cowl and push the reservoir out of the way forward and to your right. You do not need to disconnect any of the hoses.

2. On top of the FICM is a small cover held on by two #20 Torx screws; remove these two screws and pry the cover off. 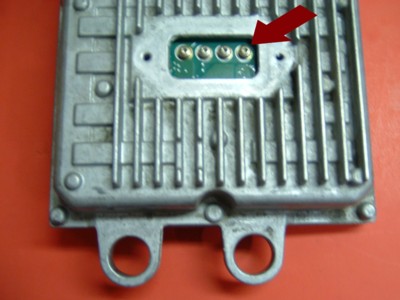 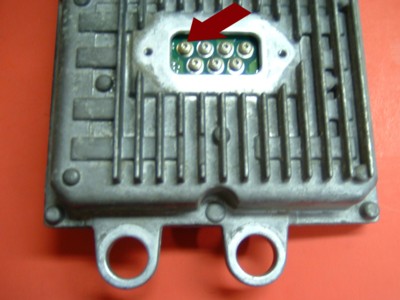 4. Take a multi-meter set on DC volts and connect the ground lead to battery negative, and with the key ON measure the voltage at the screw on your right—closest to the driver’s side fender. Do not let the probe short against the case! The voltage should be right at 48 volts.  Anything between 47 and 49 is good.

5. Have an assistant cycle the key and measure the voltage during the initial key-on buzz test. Voltage should not drop below 46 volts.

6. Next start the engine and measure the voltage with the engine running. If voltage stays at or above 45-46 volts, the FICM is fine. Abnormally low battery voltage can give a false low FICM voltage reading, so make sure your batteries are good.

**If you are monitoring FICM voltage through your OBD2 port (via scan tool)..and you have a Swamp’s Diesel 58v unit…you will need to multiply the (displayed) voltage by 1.22. We mask the signal from the FICM to the ECM by 22%. Ie..if your 58v unit is dropping to 43-44v while cranking when cold, the unit is still outputting 52.5v to the injectors, which can be verified with a multimeter, described above.

It is normal for FICM’s to drop some voltage when cold and while cranking, as the vehicle 12v power is also powering glowplugs, while the FICM may be in its’ inductive heating cycle.

On the 4-Screw FICM, as viewed from the front of the truck, check voltage at the screw on the right.

The procedure is the same for FICM’s with 7 screws, except that you will be checking voltage at a different screw, as shown in this picture. If the voltage is above 46 volts in all the tests, your FICM is in excellent condition. If it is between 36 and 45 volts its OK, but not great. If it is between 25 and 35 volts, you have serious FICM problems.

7-Screw FICM as viewed from the front of the truck. Check voltage at the

left screw on the top row of 4.

If you find your FICM has failed, there are a few replacement options.  If you have any questions, just message or call us. 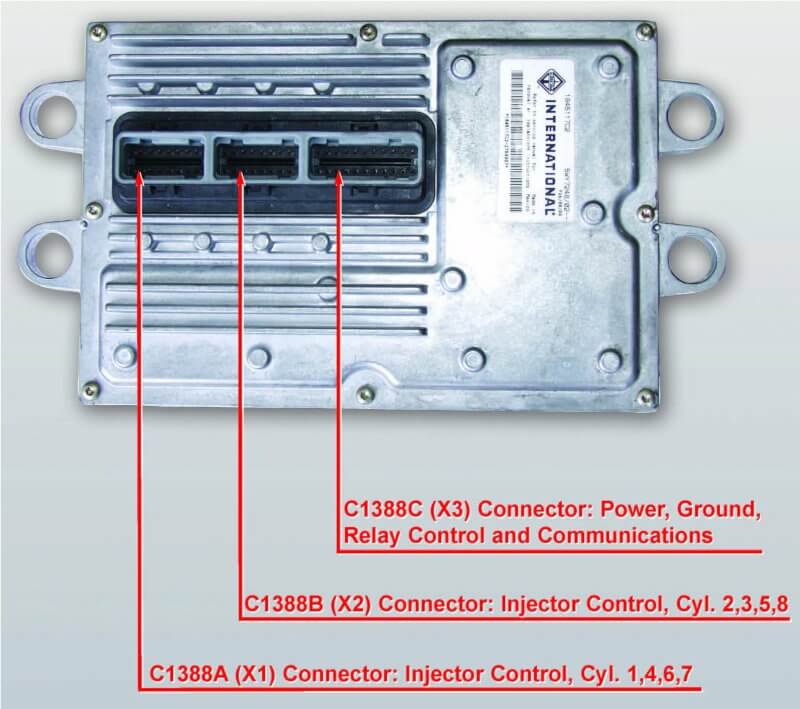 6.0L Injectors and how they operate.


The 6.0L fuel injector is actuated, mechanically, by high pressure engine oil (ICP pressure). This pressure is metered to the internals of each injector by the movement of a ‘spool valve’.

The spool valve operates similarly to a piston in a cylinder bore…without piston rings.

The fitment, or clearance between each spool, and its bore is very precise (on the order of .0001” or one ten thousandth of an inch)..compared to the comparatively loose fit of an engine piston to cylinder bore (of .0065”, or six and one half thousandths of an inch)

As 6.0L injectors wear, the spool valve will become loose in its bore. This loose fit allows the spool to get cocked sideways and drag on the bore. With cold (thick) engine oil, that further delays the movement of the spool.

While low FICM voltage can cause cold rough running, and cold-start issues, wear on an injector spool valve will cause the exact same symptom. Over the years, we’ve heard customers inaccurately complain of “my FICM is bad again” concerns because their truck is exhibiting the exact same symptoms as when their FICM was indeed bad.  However, in many cases the fuel injector (spools) were the root cause. In either case, whether it's low FICM voltage or worn spool valves, the end result is that the fuel injector is simply not firing, or simply firing ‘late’ (delayed) from the slow movement of the injector spool valve.

If you have tested your FICM voltage, and it is working correctly, but you still have the “hard cold start” or “rough running when cold” concerns and you have over 100-125k miles on your original Motorcraft fuel injectors, it's very likely that the spool valves are worn, and new injectors will correct these concerns.

If you have already replaced your fuel injectors and have tested your FICM voltage (and it’s good), then you either have an issue with your ‘new’ or ‘reman’ injectors or you have a problem that may take more in depth diagnostics and troubleshooting to isolate. If you purchased fuel injectors that were not OE(original equipment) or if modified injectors, didn’t start out as OE, the chances are very high that you purchased someone else's high mileage cores with some new fuel side components.  The spool valve will still have the same wear (or worse) as your existing injectors.

While other shops regularly sell rebuilt 6.0L fuel injectors, we recommend using new injectors for your build. Some of the parts within the injector aren't available as new, so a full correct rebuild is near impossible.


We have a lot of Ford 6.0L Fuel Injector options, so give us a call message or check out the website. 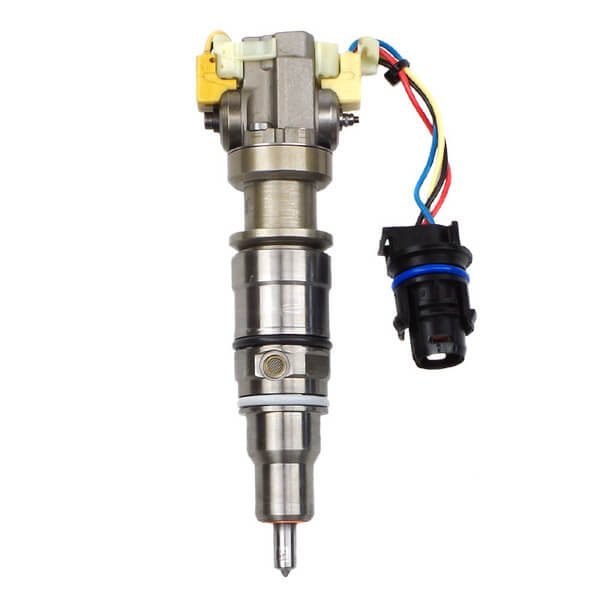 ×
Have Questions? Need some advice? We will follow up
with you via email within 24-48 hours.
Please answer the following questionnaire